How Do You Cope & Innovate During the Pandemic?

For the second of our ‘Postcards from the edge’ webinar series, I was lucky enough to be joined by three of our valued partners, Holly Carter at Confirmit, Jess Batty at Prodege and Scott Farrell at Gazelle Global. 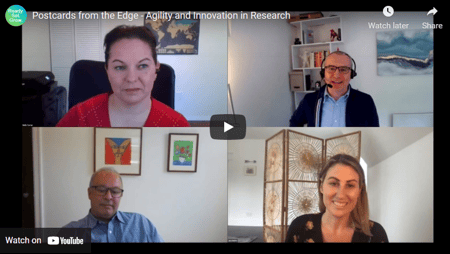 As we mark a year – and, we hope, the end – of what’s been a very testing period for all of us, I wanted to hear from my guests about how they have coped and innovated during the pandemic. We discussed the importance of agility across research disciplines, how to deal with obstacles, and made our predictions for the future. Here are some highlights of our chat:

Holly explained that by being forced into going digital, clients who had previously been wary or reluctant to use mobile, were finally seeing the benefits. So, although digitalisation is not a new innovation, Holly saw a new influx of customers going digital who, without living through a pandemic, may not have done so.

For Jess, a key takeaway of the pandemic is the importance of empathy. Alongside the virus, those in the ‘States have had to deal with the monumental public divide of the election, meaning that having an empathetic and sensitive approach to things was vital. Holly agreed, saying that she felt in the future we need to be taking a more human-centric approach to reporting, and blending humanity with technology. After all, it is our words which make us uniquely human; something we don’t want to lose.

We’ve had an influx of data in the past year, and Holly, Jess and Scott all felt that agility has been key to navigating it. We agreed that thanks to Covid pushing us in all sorts of directions, Agile has taken on a new form, and it has been crucial for coping with the huge amounts of data we’ve experienced.

Scott predicts that as natural language processes develop, it is not just translation which will progress, but anything where language is involved. It will get to a point, he said, where it won’t matter what language somebody is speaking. The emphasis will be less about the direct translation, and more about the meaning of the words. It won’t be easy, but Scott predicts the developments will happen sooner than we think.

I asked my guests about the biggest lesson they’ve learnt in the past year. For Holly, it is that despite the amount of content out there, her clients are still wanting more. She’s experienced an uptake in requests for content she’s put together, continued research, and requests for information.

It was interesting to hear the differences and similarities of my guests’ experiences in their industries – translation, tech and samples – and I am very grateful to them for speaking with me. Despite a rocky year, it is clear to see that it hasn’t held market research back and as we (hopefully) emerge from the past year, the future is looking rosy.

If you missed the webinar, click here to watch it now.