The Psychology of Naming

Humans are obsessed with names. We attempt to label every object and every idea that we happen to come across, and if we don’t have a name for something in our brain’s encyclopedia already, we are driven to inquire, or look up, what it is.

That humans attach emotional significance to names (either of people, places or even things) does not come as any surprise, I know.  But why? Our naming obsession is driven, perhaps, by curiosity, but it’s rooted in another area of our psyche: our sociality.

You’ve probably heard it before, and it seems excruciatingly obvious, but humans are social beings. Being social and connecting to others makes [most of] us happy. From an evolutionary perspective, this makes sense, as we often must depend on each other. As a result, our brains are essentially primed to anthropomorphize anything we can (to see what I mean, just check out this BuzzFeed article).

So how does this relate to names? When we encounter something new, we want to know how it fits into our social world, how we are supposed to interact with it, what it can do for us, or how it might harm us. And we look to its name as some sort of indication of these characteristics. Let’s look at a very basic example of how names are related to characteristics: looking at the images below, which one is a maluma, and which one is a takete? 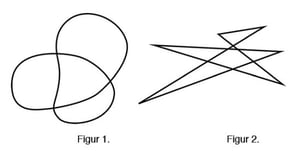 Let me guess: you said the left one was a maluma, and the right one was a takete? This little experiment was first done by Wolfgang Kohler in the 1920s, but reenactments have revealed that as many as 98% of people pair the left image with maluma and the right image with takete (other estimates hover around 80%, but it’s still an impressive percentage!)

We associate words with ‘sharp’ phonemes such t, k, c, z, g, etc. as harsh, angular, etc., like the right hand shape above. On the other hand, ‘soft’ phonemes such as m, l, s, n, etc. are perceived as gentle. And from there, we make all kinds of wild assumptions based on names. For example, researchers Heath, Chatterjee and France (1990) found that increasing the number of ‘sharp’ phonemes in fictional names for toilet paper directly influenced respondents’ likelihood of describing the product as harsh/rough.

Interestingly, research has found that brand names are neurologically processed in a different way than common nouns. Indeed, the right hemisphere (RH) is implicated in their processing more so than in the processing of common nouns. The RH has been associated with processing items of personal importance and emotional significance, so this finding supports the notion that we form emotional ties with brands, based – at least in part – on their names.

Further evidence of the social/emotional nature of names comes from looking at the ‘maluma/takete’ effect described above in individuals with autism: they only agree with the standard about 55% of the time, ever so slightly above chance (Oberman and Ramachandran, 2008). Autistic individuals do not anthropomorphize objects in the same way non-autistic individuals do, and they are generally less social. That this group fails to establish the same connotations as the general population reveals that these connotations – and general impression formation based on names alone – are rooted in our tendencies towards sociality. There is a deep connection between the name we hear and how we fit what it stands for into our known world.

So what’s the takeaway here? If you’re trying to sell a perfume called Vindox, you might be in trouble. Similarly, a rugged all-weather tent called Flamella might not appeal to many. It’s not that Vindox is necessarily a ‘bad’ word, it just indicates something to us, as social creatures: that this product/brand might be harsh, or masculine, etc. Indeed, Vindox could be perfectly suited for another type of product, perhaps cleaning solution. But it might not fit the bill for the social connotations of perfume.

It’s obvious that a good name should be catchy, and easy to remember, easy to pronounce, etc. But ultimately it should also appeal to the social nature of the product or brand being sold, or else the incongruence between name and product will drive consumers away. BuzzBack’s projective tools, like Thought Bubble, for example, help elucidate the potential social and emotional connotations of potential names to ensure the right message is being delivered by a suitable name.

The Psychology of Naming