The importance of ‘togetherness’ in driving success

I have heard it said on multiple occasions that “the soft stuff is the hard stuff”.

The quote has been attributed to everyone from Jack Welch to Roger Enrico to Michael Hammer. But no matter, I think the substance of the quote makes sense. The irony, of course, is that in our metric driven world it is usually the “hard stuff” that gets measured, while the harder to measure “soft stuff” gets left alone.

Of course, most of this is not new: in leadership circles some are trying to distinguish between IQ (Intelligence Quotient) and EQ (Emotional Quotient). In this way trying to draw a distinction between the two. Most people would agree that the soft stuff, whatever it is, isn’t easily measurable but you can recognise it when you see it.  Sustainable business success needs both the hard and the soft stuff.

What’s this got to do with research and innovation? 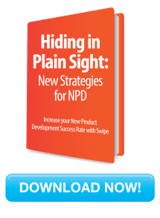 We all know that the success rate of New Product Development (NPD) is low – around 76% fail in year 1. In response to this, the insight and research industry has improved its models, made itself more agile, worked on validation and additional sources of data and assiduously looked for ways to improve our capacity to predict. But, despite this, we have not got any better. In fact, with increasing market complexity I anticipate the ability to predict will get worse rather than better.

My contentious issue is: are we looking in the wrong place for improvement? By turning the NPD spotlight away from customers and into the very organisations we work for, a better measure can emerge.

It is the idea of “togetherness”.

Nielsen in their fabulous Breakthrough Innovation Report[i], did an analysis of 61,000 SKUs and identified four rules for innovation success:

The whole report is well worth reading, but it is the fourth rule that provides a clue where we need to look for improvement in success. It is the idea of “togetherness”. This can be thought of as team work. It is the belief that if everyone is behind an idea, it is more likely to be successful. But this is also a challenge.

Historically, researchers have interviewed, observed and analysed consumer attitudes and behaviour but never the internal teams. It’s like trying to predict the success of football clubs by only focusing on the individual footballers rather than the whole team with manager support staff.

At BuzzBack we frequently engage with internal stakeholder groups involved in the innovation process. Typically, we do this confidentially so that we avoid ‘group think’ and encourage people to reveal what they really think - without saying what they think their bosses or colleagues want to hear. We have found that the easiest way of doing this is to ask internal teams using their mobile phones, so later in the innovation process we can compare the views of consumers with the internal team’s.

The similarity – or difference – between the internal and external view we measure with what we call the coefficient of togetherness. The higher the number, the closer the internal teams are to the views of the consumers. Click here to read a case study.

The advantage of this approach is that it provides an objective and explicit measurement of how close the internal team is aligned; both with themselves and consumers. This ensures that the ideas that advance have the best chance of succeeding. If success really is driven by teamwork, it is time we had a measure of this “soft stuff”.

The importance of ‘togetherness’ in driving success

For 3rd Year in a Row, BuzzBack Named in Crain's 100 Best Places to Work in New York City